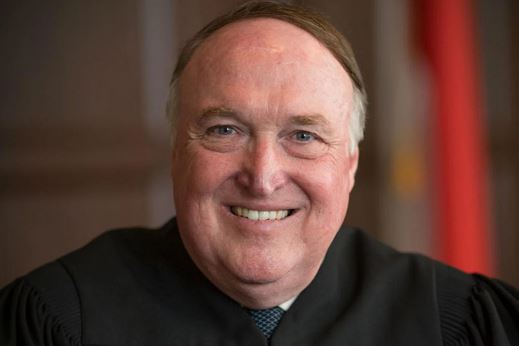 A North Carolina court of appeals court judge allegedly tried to run over a group of Black Lives Matter protesters with his SUV earlier this month. Now, he’s scheduled to appear in court next month as a defendant.

67-year-old Judge John M. Tyson of Cumberland County faces a misdemeanor charge of assault with a deadly weapon, according to his lawyer.

The alleged incident took place on May 7 near Fayetteville’s Market House, a common site for protests surrounded by a traffic circle.

Security footage from the city of Fayetteville appears to show Tyson driving through the traffic circle twice in 10 minutes. When the SUV appears the second time, he is driving in a closed-to-vehicle area — over a Black Lives Matter mural on the ground — where some protesters are standing.

Witness accounts allege that the released video footage that cuts off early, leaving out important parts of the second time Tyson drove through.

Mario Benavente, 31, is an organizer with the Fayetteville Activist Movement who was at the May 7 protest. He claims that after driving across the mural toward protestors, Tyson went on a “wild ride.”

“He loses control of his vehicle because I guess he was trying to get out of the circle, almost hits another car, and then jumps a curb before almost hitting a building,” says Benavente. “It’s at that point that I pull out my phone.”

According to a 911 call audio clip obtained by The Fayetteville Observer around the time of the alleged incident, Tyson called the police to report protestors standing in the street blocking traffic.

Benavente says police chief Gina Hawkins had previously told the activist group that if they stayed on the mural and out of traffic, they would not receive citations from the city.

It is unclear if Tyson has entered a plea.

Woman Arrested With Enough Fentanyl “To Kill One Million People”