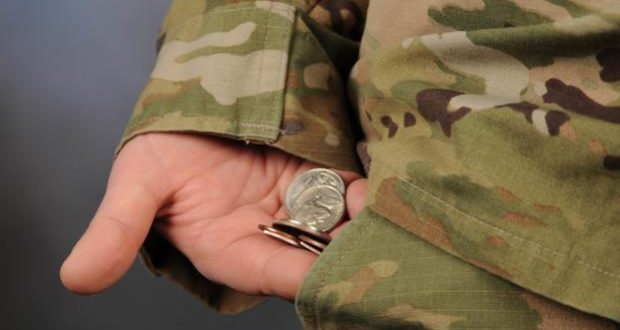 TurboTax Accused of Bilking Military Members Out of Money

Respect for America’s men and women in uniform is one of the rare things on which liberals and conservatives agree. Even those who oppose a war or an administration’s policies understand that our troops face tough challenges and could use a break.

But according to an investigative report, members of the U.S. military weren’t getting a break this tax season. Instead, one of America’s most well-known tax filing companies may have bilked servicemen with deceptive marketing schemes, seemingly on purpose.

That’s the allegation of journalists from ProPublica, a non-profit group dedicated to uncovering abuses of power.

On Thursday, investigative reporters Justin Elliott and Kengo Tsutsumi published a hard-hitting exposé asserting that TurboTax is essentially luring military members into paying more for services that are reportedly free.

“In patriotism-drenched promotions, press releases and tweets, TurboTax promotes special deals for military service members, promising to help them file their taxes online for free or at a discount,” the watchdog journalist group reported.

“Yet some service members who’ve filed by going to the TurboTax Military landing page told ProPublica they were charged as much as $150 — even though, under a deal with the government, service members making under $66,000 are supposed to be able to file on TurboTax for free,” ProPublica wrote.

It appears to be a slick bait-and-switch. Instead of leading military members to a TurboTax Free File landing page that would allow them to do their taxes at no cost, people searching for military-related filing information are instead directed to a page created specifically for troops.

But that military-specific page seems purposely intended to charge servicemen extra, while concealing the existence of the Free File option, according to the journalists.

“Like many other tax prep companies, Intuit, the maker of TurboTax, participates in the Free File program with the IRS, under which the industry offers most Americans free tax filing,” ProPublica reported. “But few of those who are eligible use the program, in part because the companies aggressively market paid versions, often misleading customers. We’ve documented how Intuit had deliberately made its Free File version difficult to find, including by hiding it from search engines.”

Do you think TurboTax is using deceptive practices against U.S. troops?

You might be able to chalk some of that up to clever marketing and effective up-selling. That alone may not be a scandal, but the use of deceptive practices aimed directly at military members changes things.

“TurboTax Military, by contrast, is promoted on the company’s home page and elsewhere. Starting through the Military landing page directs many users to paid products even when they are eligible to get the same service for no cost using the Free File edition.”

In other words, military members believe that they’re in the right place and getting the best deal when they arrive at the patriotic landing page, but all is not as it seems.

It seems to be a marketing trap, with America’s men and women in uniform as the targets.

“I am upset and troubled that TurboTax would intentionally mislead members of the military,” said Petty Officer Laurell, a U.S. Navy Corpsman who declined to disclose his full name. He told reporters that TurboTax charged him $95 this year and $100 last year, though he is supposed to be eligible to file for free.

He isn’t alone. “Using receipts, tax returns and other documentation, we verified the accounts from four service members who were charged by TurboTax even though they were eligible to use Free File. They include an Army second lieutenant, a Navy hospital corpsman and a Navy yeoman,” ProPublica said.

Although $100 or so a year may not seem like much, the reality is that our troops don’t make a lot of money, especially at the enlisted level. Tax season is stressful enough without our military members worrying about where the cash will come from to file their taxes.

The controversy is going to court. A class-action lawsuit has been filed on behalf of military members against Intuit, the software giant that owns TurboTax.

Intuit replied Thursday to The Western Journal: “Intuit has long supported active-military and veterans, both in filing their taxes and in their communities, overseas, and in the Intuit workplace. Intuit is proud to support active military, including the millions of men and women in uniform who have filed their tax returns completely free using TurboTax.”

If the claims are accurate, you have to wonder if the strategy was really worth it. In exchange for collecting a bit of extra cash from our troops, TurboTax is now facing a public relations nightmare and a lawsuit to boot. Here’s hoping the company will address this issue and finally make it right.

Previous: Trump’s Campaign Considers Creating a New Account on a Conservative Version of Twitter
Next: Franklin Graham Calls for ‘Special Day of Prayer’ for President Trump