July 4th Could Be Tipping Point For Outbreak 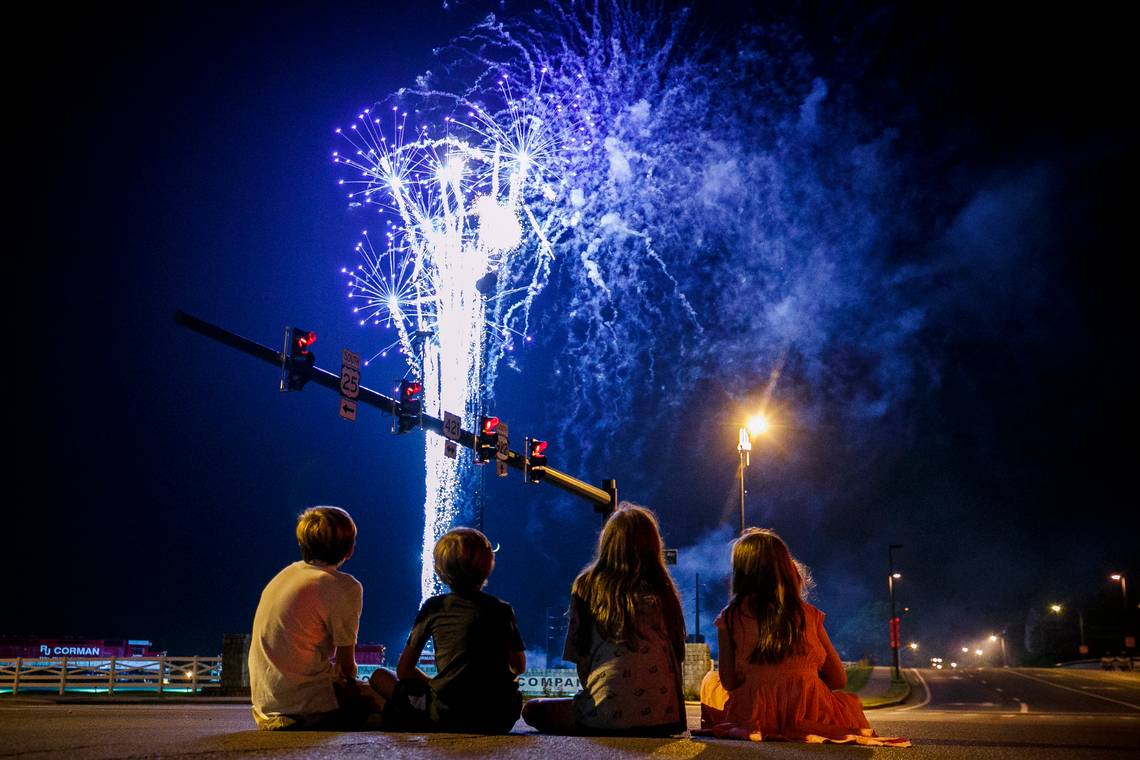 Doctors say that this Fourth of July weekend will be a ‘tipping point’ in the U.S. coronavirus outbreak as they warn that it is ‘crucial’ people don’t gather in large groups.

The holiday weekend comes just as authorities in several states are closing up bars and other drinking establishment for the second time as the country continues to see record numbers of new coronavirus cases.

Experts say that focus should instead be given to reopening schools as the academic progress of the country’s children struggles, resulting in ‘virtual dropouts’.

According to the New York Times, the sudden switch to online learning because of the pandemic has resulted in some students losing up to a year in academic progress.

On Thursday, New York City Mayor Bill de Blasio announced that city schools would reopen in some form this September with a cap on how many students can attend.

It comes as the number of new daily coronavirus cases in the U.S. topped 52,000 for the first time Wednesday and Dr. Anthony Fauci, the White House’s top virus adviser, warns that lockdown has been lifted too soon.

Health officials are warning that if people do not follow guidelines this Fourth of July weekend, it could lead to a further rollback of reopenings as states struggle to keep their number of new daily coronavirus cases from rising.

‘There’s no question that the actions people take this weekend can determine the future in the next couple weeks and the next few months as well.’

Doctors are especially warning against gathering in bars after large outbreaks have been linked to drinking establishments in several states.

In Louisiana, at least 100 cases were linked to the Tigerland nightlife district in Baton Rouge while in Minnesota, 328 recent cases have been traced to bars across the state, according to the New York Times.

In East Lansing, Michigan, an outbreak tied to a large brewpub near Michigan State University has spread to nearly 140 people in 12 counties, causing authorities to recruit nursing students and retirees to help with contact tracing.

‘In 12 days, we went from two identified cases to 128, and, honestly, I don’t have today’s numbers yet,’ Ingham County health officer Linda Vail said Wednesday before cases shot up again.

She described her outlook as ‘shocked and overwhelmed’.

Crowded indoor spaces filled with people yelling, leaning close to hear one another and touching the same sticky surfaces are ‘the opposite of social distancing,’ said Dr. David Hamer of the Boston University School of Medicine.

‘Can you do social distancing at a bar? Can you wear a mask while drinking?’ Hamer said. ‘Bars are the perfect place to break all those rules.’

In recent weeks, college towns across America have seen clusters of cases that have been traced back to bars. Bars and restaurants near the University of Iowa and Iowa State University closed only weeks after the governor allowed them to reopen.

As of last week, 90 percent of cases in the county that is home to Kansas State University involved people ages 18 to 24. Health officials said most of them spent time in a bar and restaurant district known as ‘Aggieville’.

Citing a similar spike, the Kansas county that includes the city of Lawrence and the University of Kansas also ordered bars and nightclubs to close beginning Friday for the next two weeks.

‘Congregation at a bar, inside, is bad news,’ Dr. Anthony Fauci told a Senate panel Tuesday. ‘We really have got to stop that.’

Texas, Arizona, Los Angeles and some Pennsylvania counties are closing bars to slow the spread of the virus. Florida and Colorado have told bars they cannot serve alcohol on site.

Most bar owners and employees feel that they have been unfairly singled out, particularly because restaurants are still open and serving alcohol.

In Texas, bar owners said that on Friday after they were forced to close their doors, they noticed restaurants were still packed.

‘You can go into a restaurant and they have bars, and you can have as many drinks as you want,’ said Nikki Forsberg, owner of the Old Ironhorse Saloon in Blanco, Texas. ‘It doesn’t seem fair. Restaurants get this pass and the bars don’t.’

Yet as bar owners push to be allowed to stay open, health experts are warning that focus should instead be placed on reopening schools as the country risks a high level of ‘virtual dropouts’ with children losing up to a year of academic progress.

She says that more has to be done outside of schools by keeping other places closed to ensure that children will be able to physically attend classes in the Fall.

‘”How do we safely reopen schools?” is not the right question,’ she said.

‘So by making schools reopening and staying open a priority, a better question is “how can we keep community transmission low enough that the schools will not need to close?”

‘I propose we need to look at *all* the things that we want to reopen and face the fact that if we truly want to prioritize schools opening and staying open, some other parts of our society might just have to wait,’ Jenkins continued.

‘What has to wait is debatable: sporting events? bars? seem lower priority than schools. Other things can be included. But point is: keeping *community* transmission low enough to ensure schools continue should be the framing.’

‘If somebody said to me, “Do you want to be able to go and dine in at your favorite restaurant, over the next year, at some point, or do you want to have a guarantee that your kids are going to get to go to school every day?,” it would be an easy decision to make,’ Jenkins added in an interview with Slate.

The importance of making schools a priority reopening in Fall was emphasized by Joseph G. Allen, an assistant professor of exposure assessment science at Harvard University, who highlighted the impact it is having on children in an op-ed with the Washington Post.

‘Twenty percent of Boston high school students didn’t log into class in May, and only half of the elementary school children in Philadelphia made daily contact,’ he wrote.

He added that school closures work to widen the country’s educational gap, exacerbate racial and social inequalities, impact children’s health and puts them at greater risk of abuse, neglect, exploitation and violence.

Allen said that strictly measures would be implemented in schools to allow them to reopen including cleaning the air indoors and wearing masks with breaks built into the day.

‘Make no mistake, there will be outbreaks in some schools even with these measures. Whether we open schools will be determined by our risk tolerance as a society,’ Allen continued.

‘What will we accept for schools? If the answer is “zero cases,” that will require us shutting schools for another year. The costs of that approach are too great, especially when there are proven risk-reduction strategies at hand.’

Experts are also warning that some students could lose up to a year of academic progress if closures continue. Pictured, students from each graduating 5th grade class practice before they Pledge Allegiance for their upcoming virtual graduation in New York City

Epidemiologist Dr. Jennifer B. Nuzzo and pediatrician Dr. Joshua M. Sharfstein argued for a similar set of measures in a recent op-ed for the New York Times.

‘Officials let bars, restaurants and gyms open, despite warnings from public health experts that these environments pose the greatest risk for spreading the disease,’ they wrote.

‘Yet political leaders seem to have paid scant attention to safely reopening schools.’

They blasted these priorities as ‘backward’ arguing that the current disruption to children’s learning could have a lifetime effects on their income and health, and arguing that Austria, Denmark, Germany and Norway had successfully managed to reopen schools without any outbreaks.

On Thursday, New York City Mayor Bill de Blasio announced that he would be reopening schools in the Big Apple in some form this September.

The nation’s largest school system will implement measures including staggered classes to comply with social distancing.

‘Schools will be opening in September,’ de Blasio said. ‘Each school will have a number that is the maximum number of kids that can be in that school with social distancing using every conceivable space in that school.’

The decision was announced after the White House’s top virus adviser Dr. Fauci stated that America’s coronavirus lockdown was lifted too soon, was never strict enough in the first place, and that young people are driving a second wave that has seen daily infections top 50,000.

Dr. Fauci said the ‘very disturbing’ new rise in cases is being caused in part by the fact that the US never got its first wave under control – only locking down around 50 per cent of the country compared to 97 per cent as happened in most of Europe where daily infections are now very low.

That meant that when the economy started to reopen, the virus began spreading rapidly almost immediately because there were still a large number infected people to pass the disease along, he told BBC Radio 4 in the UK.

But he added that the rise is also being driven by people, particularly young people, gathering in large groups, without socially distancing, and often without wearing masks – such as in bars, at beaches, and during protests.

‘What happens when you do that, and you don’t wear a mask, you get the kinds of outbreak we’re seeing,’ he said.

Fauci spoke after the US reported a record 52,000 new COVID-19 cases within 24 hours on Wednesday, according to data from Johns Hopkins University.

The daily coronavirus case numbers have remained around the 40,000 mark in recent days. More than 44,000 new cases of COVID-19 were confirmed in the US on Tuesday.

Adding to the rise in cases, hospitalizations for COVID-19, the contagious respiratory disease that first emerged in China, are also increasing in Houston, Texas and Phoenix, Arizona.

On Wednesday alone Texas broke its daily record and recorded 8,076 new cases, which is nearly 1,000 more than the day prior.

8 thoughts on “July 4th Could Be Tipping Point For Outbreak”