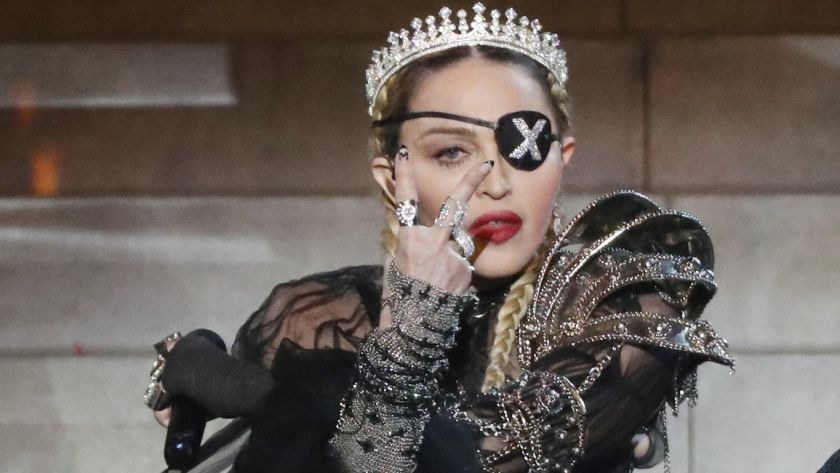 It seems that most celebrates lean far left, and are often arrayed against Donald Trump. But not all of them. Of course, there is Kanye’s well-known support of the president, and now another “big name” has come out supporting the president’s controversial position on COVID and hydroxychloroquine.

As you know, from early on in the pandemic, the President has promoted the use of the malaria drug as an effective treatment for COVID-19. He reiterated that support more recently, by posting a video by the “America’s Frontline Doctors,” who among other things – such as downplaying the effectiveness of masks – touted the use of the drug. Since it was retweeted by the President himself, the video immediately went viral.

However, the video drew controversy; it was labeled as spreading “conspiracy theories” and “misinformation” about the coronavirus and was soon taken down by social media outlets. But, not before it could be posted not once, but twice by the pop star.

Madonna showed her support for the doctors shown in the video, including Dr. Stella Immanuel who drew ridicule for earlier videos that turned up with her speaking about “alien DNA,” and “sex demons.” Nonetheless, Madonna shared the videos of doctors describing the malaria drug as a “cure” for COVID-19 to her 15.4 million followers. On Instagram (which has allowed the video with a warning that it could contain false information) she wrote: “The Truth will set us all Free. But some people don’t want to hear the truth.”

Madonna’s caption accompanying the video continued, “Especially the people in power who stand to make money from this long drawn out search for a vaccine Which has been proven and has been available for months.” Adding, “They would rather let fear control them and let the rich get richer and the poor and sick get sicker.”

President Trump referred to the controversial video in his coronavirus briefing the day after tweeting it. After saying that he found Immanuel to be “impressive,” he went on to say that, “Many doctors think it is extremely successful. The hydroxychloroquine coupled with the z-pack. And some people think it’s become political. I took it for a 14-day period. And I’m here. I think it works in the early stages. I think front line medical people believe that too…”

The video was originally pushed by right-wing site Breitbart and went on to be viewed millions of times before it was taken down by Twitter, Youtube, and  Facebook.

False information? Or censorship of a truth that could support claims about the virus and hydroxychloroquine made by Trump for months, that has been much maligned by the mainstream media?

During a recent interview on Fox News, the President said that if he went on TV and said that hydroxychloroquine was bad, and not to take it, the media, would have pushed it, just to disagree with him and make him look bad. During the interview with Fox host Clay Travis, Trump said “If I would have said, ‘I don’t believe in hydroxychloroquine, it’s terrible… I don’t believe in it, it doesn’t work,’ it would be the hottest thing going right now.”

What do you think, is the media shutting down the truth about COVID-19 just to hurt Donald Trump’s chances at reelection? Reply in the comments below.