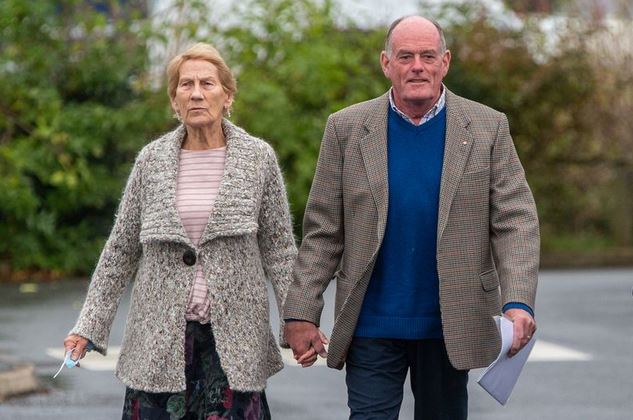 The elderly couple held on suspicion of murdering their son who disappeared 29 years ago say they went through “hell” after their arrest.

His parents, Doris and Charles Clark, were arrested and questioned in September as part of a murder probe following a cold case review.

Now released, Doris had been accused of murdering Steven, while Charles was thought to have buried him in the back garden of their home.

“We were never guilty, ever, ever, or ever going to be. But it was a big turn of events for the police. They never communicated with us at all, we just had to get out of the house, and that was it. We knew they were going to search the house but then we had to leave for four and a half days. We were then held for quite a few hours in different cells,” Doris recalled.

“To solve the mystery of what happened to Steven would be the most wonderful thing ever. We really cannot answer questions about his disappearance because we just don’t know anything,” she said.

“Sometimes we thought ‘have aliens come down to snatch him up?’ There is no answer to anything we ask. It is a horrendous mystery. It has changed our lives completely, it is just the strangest thing ever. It is as though someone has whisked him away – your mind runs riot about what could have happened, because there are so many unpleasant people in the world,” Doris added.

Doris reported Steven missing in Saltburn, N Yorks on Dec 28, 1992, after they used a public restroom. Doris was using the women’s bathroom while Steven was in the men’s. But he never came out.

She returned to their home in Marske three miles away in hopes he would return there, but reported him missing when he never showed up.

According to the Clarks, there is no evidence of their son being murdered.

However, Cleveland Police believe he has ‘come to harm’ since there has been no sign of life since his disappearance.

Charles, 78, like his wife, a former police officer, said they were ‘ignored’ for 17 weeks after they were questioned.

Doris compared their situation to that of the family of Claudia Lawrence, the chef who went missing in York in 2009. Her father Peter died this week, never knowing what happened to her.

“Mr. Lawrence thought she had been murdered, but they don’t know. Nobody knows any more about her than we do about Steven,” Doris said.

“Sadly her father died without ever finding out what happened to her. We have never declared Steven dead, because then there would not have been any more inquiries whatsoever. And we didn’t want that. After all this time, we still have that scrap of hope, it keeps you going. Of all the people to just disappear like that it had to be Steven.”

“They have dug everything up in the garden. They moved the shed. Why pick on us? I haven’t got a clue. Why it took so long to free us, I don’t know,” Charles said.