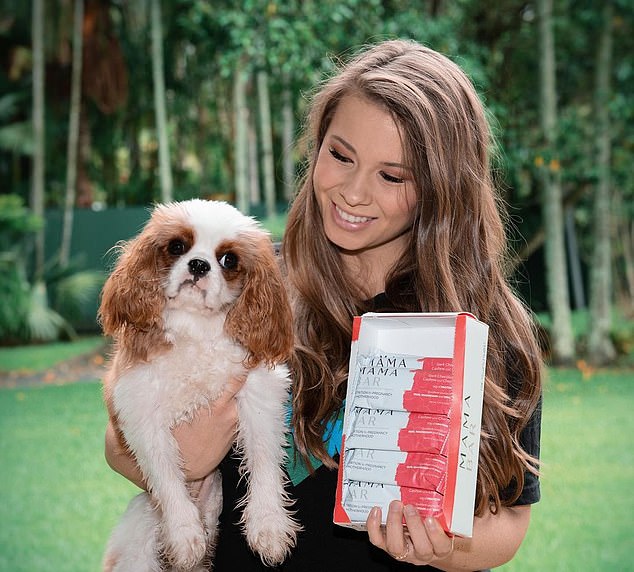 Bindi Irwin has promoted a snack bar, after revealing her family’s financial struggles.

She posed with her dog and a package of the snacks, while espousing their virtues in a long caption.

The Wildlife Warrior wrote: ‘Pregnancy has been such a special time and I wanted to find a snack that was good for me and our beautiful daughter.

‘I found Mama Bars @mamabarofficial and discovered how delicious they are. I’m soy and lactose intolerant so these bars being free of both is absolutely perfect. I snack on them whenever I need a pick-me-up.’

‘I was excited to partner with the Mama Bar team to share these delicious bars with you,’ she added, as well as sharing a 15 percent off offer.

The post comes after Bindi, who is expecting her first child with husband Chandler Powell, 24, revealed her family was having financial issues.

Australia Zoo was forced to shut for 78 days last year due to the pandemic, but the Irwins still had to pay $80,000 a week to feed the animals – placing them in a dire financial predicament.

In an emotional statement shared by Bindi in December, she detailed the struggles her family had faced in 2020.

Tough: Australia Zoo was forced to shut for 78 days last year due to the pandemic, but the Irwins still had to pay $80,000 a week to feed the animals – placing them in a dire financial predicament

‘For us, this year was filled with both tremendous joy and heartbreaking loss,’ Bindi wrote on Instagram, marking 50 years since the zoo opened in 1970.

She said the Australia Zoo Wildlife Hospital was the ‘busiest it’s ever been’ due to the bushfires, adding that it was costing them $80,000 a week alone to feed the animals.

She revealed that 2020 was the first time in history the family had to close their gates to guests, saying: ‘Every moment of every day the question of when or if we would recover burned in the back of our minds.

‘Our animal food bills alone are about $80,000 per week and we spent our days trying to keep our team and family of animals safe.’

Terri Irwin had previously said during an episode of Crikey! It’s the Irwins that the Sunshine Coast zoo spends a whopping $400,000 per week on wages.

Despite the tough year behind them, Bindi concluded her post on a positive note.

‘However, we were reminded that there is always hope on the horizon,’ she wrote.

‘Things turned around in Australia and we were able to open our doors once again to people needing a safe haven of gardens and wildlife.’

13 thoughts on “Steve Irwin’s Family Is In Financial Trouble”